It is impossible to know how many civilians have died in Afghanistan since this conflict began.
There are no records pre-2007, and the records that have been kept since then might not be accurate.
United Nations and the Afghanistan Independent Human Rights Commission (AIHRC) have both started to keep databases of civilian fatalities, but their efforts are hampered by lack of resources and insecurity. Therefore, it is probably fair to assume that any figures released are lower than the actual number.
The figures presented here relate to short periods of time compared to the 10 years of conflict suffered by the people of Afghanistan.
Statistics up to 31 January 2011

Due to the difficulty of recording casualties among the civilian population, the above figures should be taken as estimates. 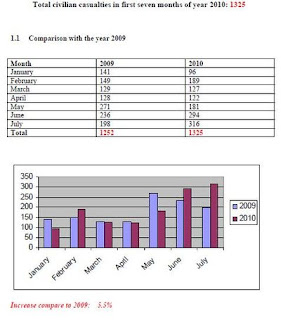