The information we have regarding contractor fatalities primarily deals with security contractors operating in Afghanistan either alongside, or indepently of, ISAF troops.
The following data was provided by The George Washington University Law School, Service Contractor Newsletter, September 2010. 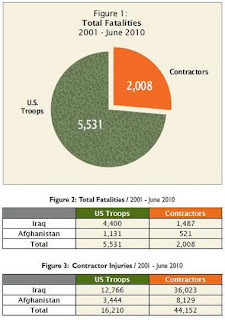 From 2001 to June 2010, 521 contractors were killed in Afghanistan and 8,129 were injured.
Why use non-military security contractors?
Contractors can provide operational benefits to the U.S Department of Defence (DOD). Using contractors to perform non-combat activities augments the total force and can also free up uniformed personnel to perform combat missions.
Since contractors can be hired faster than DOD can develop an internal capability, contractors can be quickly deployed to provide critical support capabilities when necessary.
Contractors also provide expertise in specialized fields that DOD may not possess, such as
linguistics. Using contractors can also save DOD money. Contractors can be hired when a
particular need arises and be let go when their services are no longer needed. Hiring contractors
only as needed can be cheaper in the long run than maintaining a permanent in-house capability.
Further reading and data sources:
1. Contractors and the Ultimate Sacrifice - Steven L. Schooner and Collin D. Swan,
The George Washington University Law School
2. Department of Defence Contractors in Iraq and Afghanistan - Congrassional Research Service
Other reading:
Contractor Deaths Accelerating in Afghanistan as they Outnumber Soldiers - ProPublica