Order of Battle:
What is an Order of Battle?
An Order of Battle (OOB) is a standard military term for the description of a military organization. It presents which units exist, how are they organized (command structure, subordinate/superior relationships, equipment), and their responsibilities (geographic area, operation capabilities).
What are the Afghan Security Forces?
The intent of this OOB is to present all the security forces that are under the official control of the Afghan government. The OOB includes regular Army, Special Forces, Navy, Air Force, national and local police, and border security units. The OOB does not include militias, insurgent forces, or foreign forces that are not under the official control of Afghan government.
The following links set out the OOB (all are .PDF files):
Page 1: Afghan Security Forces Order of Battle Index Page
Page 2: Definitions
Page 3: Afghanistan National Security Force (ANSF)
Page 4: Afghanistan National Army (ANA)
Page 5: Afghanistan National Army Air Corps (ANAAC)
Page 6: Afghanistan National Police (ANP)
Source: Long War Journal 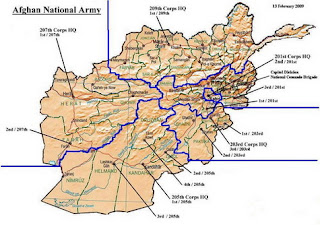 Afghan National Army Air Corps (ANAAC)
Founded: June 2008
Current Strength: 3,628 men and women, including 187 pilots, plus
29 rotary-wing and 10 fixed-wing aircraft (17x Mi-17, 3x DV
Mi-17, 9x Mi-35, 5x AN-32, 1x AN-26, 2x C-27 and 2x L-39)
Target Strength: 7,500 personnel and 125 rotary and fixed-wing
aircraft by December 2016
Capacity:
Flies 90% of ANA air support missions in 2009 (compared
to 10% in mid-2008).
Moves more than 5,000 passengers and over 40,000 kg of
cargo monthly.
NATO training efforts in Afghanistan will focus on the need to significantly increase the
capacity of Afghan security forces in order to hand over gradually lead responsibility for
security to Afghans themselves. In Regional Command Capital, since 28 August 2008, the
Afghan National Security Forces have gradually taken over the lead responsibility for
security in Kabul province. This process is led by the Afghan Ministry of Interior and
supported by the Ministry of Defence and ISAF. 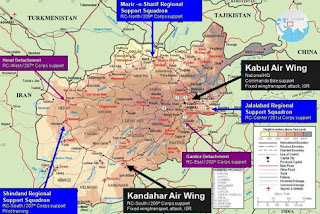